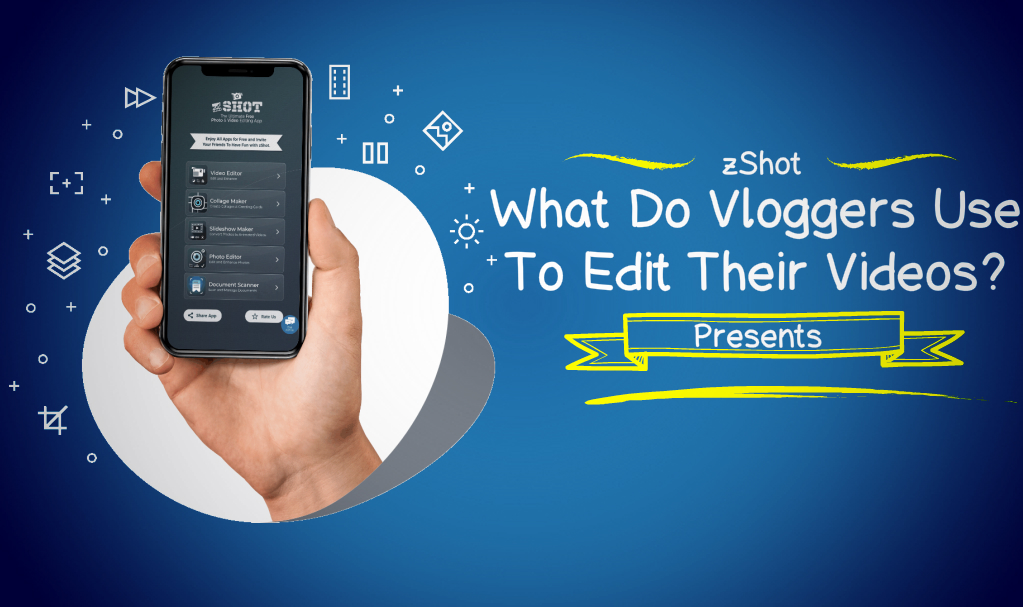 What Do Vloggers Use To Edit Their Videos?

Vlogs are everywhere. Any topic we can think of possibly has its own niche audience on YouTube, Instagram, or Facebook. But what video editor app do these vloggers use to edit their videos?

Vloggers use editing software like iMovie, zShot, Filmora, Adobe Premiere, Final Cut, and more. They use these videos to produce content on YouTube, mostly. They either edit on their own while the higher-earning ones have an editor or a team of editors.

In this post, we will discuss the art of vlogging, what vloggers use to edit their videos, and editing techniques to learn if you want to vlog.

The art of vlogging

Vlogging—why do they call it that way? And why should one call it art?

First of all, “Vlogging” is called such because it is blogging in video form.

Second, we would agree that it’s art on its own. That’s because vlogging takes a lot of confidence, patience, and grit… The list of factors goes on and on. Vlogging is also not for everyone; that is why it’s a brave passion to have.

Over the years, vlogging has been a content marketing powerhouse tool. Remember that YouTube is the biggest search engine next to Google. People actually go to YouTube before they buy a product or sign up for a service. It can singlehandedly affect consumer behavior.

That is why so many businesses are investing in video content marketing. When it works, the rewards are just boundless.

Meanwhile, vloggers are not to be underestimated as content creators, either.

Other influencers even made their mark and birthed a whole new industry, but then left it all of a sudden. Some also have no plans of stopping despite being infamous on the web.

As you can see, vlogging is not just a fancy-schmancy hobby. It’s a real job that thousands of people have. It’s their livelihood. Regardless of the platform, vlogging is a rollercoaster of milestones, failures, and spirals.

That is why if you plan to take vlogging seriously, you should know the best tools for editing vlogs.

What do vloggers use to edit their videos?

Vloggers can either use a single editing tool or a couple, depending mostly on the kind of video they are making.

For example, if the person wants to Vlog on TikTok, Instagram, or YouTube, then that will determine the editing software that they will use. However, some also stick to one editing tool—no matter what kind of video they are trying to produce.

Here are the most common vlog editing tools:

zShot is a powerful editor for a smartphone app. You can merge videos, adjust the speed, add background music, delete the video’s middle part, add text or emojis, and many more. Best of all, zShot has a photo editor, document scanner, collage maker, and slideshow creator. All those in one app. Plus it’s free.

iMovie is a free reliable tool by Apple. It may be friendlier to beginners with its no-nonsense drag and drop interface, but it also supports 4k video. You can also add effects and text. It even has trailer templates if you’re making a short movie. Sadly, iMovie is not available on Windows, but it is available for Mac OS and iOS devices.

Rush is the official video editor app for smartphones by Adobe. It has a drag-and-drop interface that lets you arrange multiple clips with ease. It also allows you to add titles, voiceovers, and transitions. Rush is available for free on the App Store and Google Play Store.

Magisto is another trusted award-winning editor by vloggers. It has many video templates for any occasion. You can also add royalty-free music from their library. Magisto is free but it has two paid plans: the Professional plan and the Business plan.

ShotCut is also a video editor that packs a punch. You can produce various types of videos through ShotCut since it caters to a huge array of file formats. It also has a clean interface, which lets you trim, cut, and paste clips easily. The video and audio filters are also customizable. ShotCut is one free video editor app for vlogging you shouldn’t miss to try.

If you want to take on more complex types of content later, then you should put Pinnacle Studio 22 on your list. It just hits the right notes with its split-screen effect, stable interface, and advanced editing tools. You won’t also feel limited with its generous stack of effects. This is not an app for newbies, but it’s definitely something you want to try using down the road.

If Filmora9 was an actress, it would be one of those talented, upcoming ones who also look perfect in candid photos. Filmora9 has a pristine interface that is perfectly coupled with topnotch tools and effects. For its price, you can upload content from your phone, camera, and Facebook, and sprinkle graphic overlays flawlessly. And for that, Filmora9 is truly worth a try.

PowerDirector 365 lets their subscribers enjoy premium filters, titles, songs, and other download packs. If you subscribe, you can edit through three modes: Timeline, Storyboard, and Slideshow. Its Timeline Mode allows for easy drag-and-drop if you have experience editing in other types of software before.

Now we’re talking professional. Final Cut Pro X is what you use if you’re a seasoned editor. While its interface has a similar interface design to iMovie, its features are a few higher levels of an upgrade. It supports videos like 4K, HDR, and 360-degree, plus you can manage color and edit audio perfectly to a T. For seasoned editors who want to vlog to display their skills, they should use Final Cut Pro X.

If you’re an intermediate editor who wants to move up to being advanced, then this software is for you. It has great tutorials, which allows for an easy learning experience. It also has a drag-and-drop interface and a straightforward importing process. And for that, it’s a practical video editing tool you should at least try using once.

Like its name, you will feel ease in this video editing software. It’s perfect for beginners who want to produce as many videos as they want at the beginning of their vlogging journey. It has an adequate collection of effects, overlays, and transitions, which means you can test out your taste in editing and then improve as you go.

If you’re beginning to vlog, zShot is the perfect companion. With its array of features and other useful tools, not only will you edit videos swiftly but will also become a productive vlogger.

zShot is available on the App Store and Google Play Store.

How to Record audio in zShot Video Editor

How to Trim/Cut Videos Easily with zShot video editor?