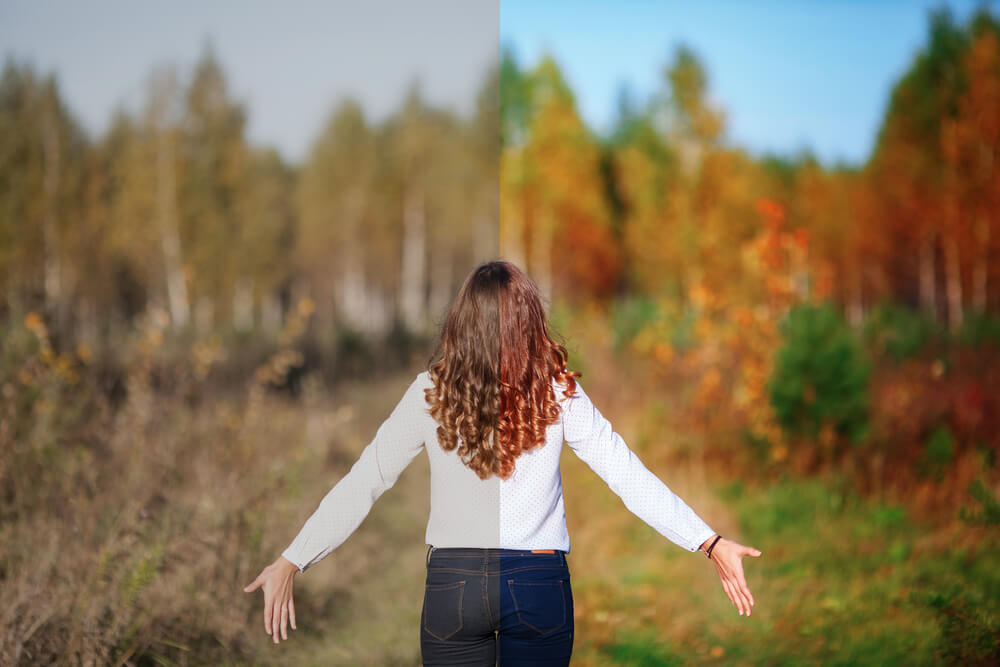 Knowing how to take pictures is different from knowing how to edit photos. It’s good to be skilled in the former; but if you’re talented in both areas? You will be unstoppable.

In this article, we will provide photo editing tips that will put magic even in your most mundane photos. We’ll also teach you how to edit photos using zShot.

Learning how to edit photos: The basics

Let’s start with the basics, first.

What is the purpose of knowing how to edit photos?

To know the main purpose of editing photos, let’s compare it with photo retouching and photo manipulation.

If you retouch a photo, you will be erasing or concealing the subject’s physical flaws like cracks, acne marks, spots, or wrinkles. You will make modifications to the subject to make it look more presentable.

Photo manipulation, meanwhile, is done to a picture to provide a whole new look. You will add more context and details—artificial background, visual effects, text, etc.—to depict a new message that the raw photo cannot.

It’s almost similar to photo editing but think of photo manipulation as the more extreme sibling.

On the other hand, when you’re editing a photo, you’re mainly enhancing what is already there. For example, if you take a shadowy photo of the Empire State Building, you may want to show more details by increasing the brightness and highlights.

You might add filters and change the hue of the photo, but you won’t need to erase the windows or add more clouds. That is already photo manipulation.

In a nutshell, the purpose of editing photos is to bring the best out of them. You edit a photo to make it more pronounced and beautiful. Knowing this main but necessarily only purpose will help you learn how to edit photos like a pro.

On that note, read on to get to know the basic editing tools.

What are the basic photo editing tools?

Part of knowing how to edit photos is studying the tools. Without knowing each of their functions, you’ll be making a Frankenstein of a photo.

Moreover, you might not bring out its true potential, or worse, you will send the wrong message. As a result, get to know what these editing tools should do before you practice how to edit photos.

How to edit photos

Editing your photos will help you add more focus, interesting factor, and context.

You can crop your photos to do two things: put the focus on a subject or tell a different story.

In the photos below, the girl in the wheelchair appears to be working on her laptop. I cropped out the space on the left because it takes away the focus on the girl.

If you want to portray a message of productivity, then the focus must be on the subject, which is the girl.

While it’s not a big deal, sometimes an extra space on a photo will leave the viewer looking for something other than the context you’re trying to depict.

Plus, putting the focus on the subject makes the photo more vibrant. Her smile, mustard-yellow shirt, and laptop pop out from the dark gray background.

Meanwhile, you can crop out other subjects on a photo to tell a different story or to depict one angle only.

The original photo on the left shows another soccer player, which shows that this is soccer practice.

However, what if I want to portray a specific angle such as the boys waiting for their turn to practice with the soccer ball?

As you can see, when I cropped out the other guy on the left, the angle I was trying to portray is now clearer.

As we’ve mentioned, you use the Brightness tool to either show or hide details in your photo.

Below, the original photo on the left is dark and gloomy. The clear blue sky behind the subject doesn’t get the exposure it deserves.

Meanwhile, the subject is almost becoming a silhouette since she’s being overwhelmed by the dark shadows caused by the light behind her.

As a result, we increased the brightness and contrast. You can now see her face clearer and the blue sky behind her has that cerulean shade, which is more interesting to look at.

See? You don’t always need to slap on a filter on a photo to improve it. Sometimes, you just need to amp up the brightness a little bit.

On the other hand, decreasing the contrast will mute the colors and make the photo look flatter.

The photo shows a hand pumping out what appears to be a handwashing soap or hand lotion. If you’re making a social media card about hand hygiene, then you can increase the contrast of the photo to highlight the action.

This way, you wouldn’t need to add text on the photo, as the picture itself clearly sends the message. You can instead write about hand hygiene on the caption.

Meanwhile, if you want to add text to the photo, then you can decrease the contrast, making the photo as a background. This gives way to the text being more noticed by the viewer.

Unlike the Contrast tool, using the Shadows and Highlights tools gives you more freedom.

Using the Shadows tool, you can multiply the dark areas in a photo, making it look more dramatic and mysterious. However, you won’t be increasing the highlights in a photo, unlike what you would do by using the Contrast tool.

If you add more highlights, the photo will appear more approachable. It will give a positive note.

As you can see in the two photos above, the one on the right depicts a more serious message. It will keep you guessing for a while on why he sits on the window ledge. It’s also not clear what he’s feeling since you can’t easily see his facial expression.

The one on the left, meanwhile, is easy to figure out. You can see that he’s tinkering with something. Moreover, the increased highlights reveal more of the room, giving you more clues about the photo’s context.

Here is another example of playing with shadows and highlights.

The left photo’s shadows were brightened, letting you see the hand clearly. The right photo, meanwhile, adds more distinction between the shadows and the light.

Tinkering the shadows and highlights of the photo is the key to showing more or less.

Amping up a photo’s saturation levels will make the bright colors even more vivid. In the example photos below, the original photo looks blander. That’s because it has a cool tone.

If you’re taking a pic of food or drinks, decreasing the photo’s saturation is a no-no. This will make the photo unappetizing.

Meanwhile, when we increased the saturation of the sample photo, it almost had a 360 change. The colors look more inviting this time.

I didn’t even tweak the photo’s contrast—I just simply increased the saturation.

With a well-lit photo with many details and patterns like this, you don’t always need to increase the contrast to make it even more interesting.

If you want your photo to have more clarity, then you can rely on the sharpness tool. It can make your image more lifelike. You can also use this tool to alleviate a blurred or hazy photo.

In this photo, we increased the sharpness because the subject has an almost similar hue to its background.

After increasing the sharpness, the wrinkles on the glove jumped out even more. The shadows between the fingers are also deepened.

With the help of the sharpness, shadows, and highlights tools, you can make your subjects pop out more even though their colors are in the same family with their background.

Using the Hue tool can let you wash the photo with any color you like.

Adding a color that is different from the dominant hue of the photo will allow an explosion of moods. This will make it more intriguing. If your purpose is to grab attention, then you can do that in your photo.

Now, if you want to depict a mellow or lighthearted story, you can stick to the hue that’s closer to the dominant color of your photo. This will make your photo’s elements more coherent

As you can see, the original photo had a dominant color combination of white and mint. The subjects also show gentle interaction. Therefore, adding a refreshing hue of light blue suits it well.

The photo looks cool but not depressing.

Last but not least is adding filters. Although you can control their intensity, adding filters is a one-tap, all-in-one solution to a bland raw photo.

With a filter, you’ll be adding a different hue and increasing or decreasing the shadows, brightness, sharpness, etc. at the same time.

A filter can single-handedly change the mood of a photo. You can make it look like it was taken in the 80s or you can make it appear like a heartwrenching sports drama.

The sample photo above may be clearly depicting joy, but adding different filters puts different layers of emotion to it.

Being armed with filters and editing tools on Instagram is pointless if you don’t know how to use them. As a result, don’t forget to practice making the best out of each editing tool.

How to edit photos on Android?

You can edit your photos on zShot, Adobe Express, or Adobe Lightroom.

Learn how to edit photos like a pro with zShot

You can do all those editing tricks we mentioned above and more when you use zShot.

How to Make a Slideshow With Music

Which Photo Editing App Is Best for You?

What is the Best Slideshow Maker App?